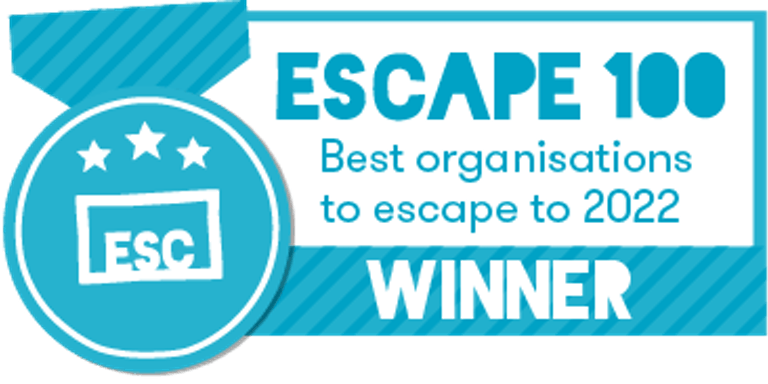 PayCaptain is a winner of The Escape 100: the top purposeful organisations to ‘escape’ to in 2022

This well-known campaign spotlights the top organisations to ‘escape’ to from traditional corporate careers, with great planet, people and mission policies.

The winners of The Escape 100 were chosen from 13,000 nominations and include social enterprise giants like Oddbox, OLIO, Too Good To Go & Moving Worlds.

The list comes at a time when consumers and job-seekers alike are shifting attention towards more planet-friendly, human, and purpose-led companies.

PayCaptain has been selected for The Escape 100, a well-known campaign highlighting the top purpose-led companies to ‘escape to’ in 2022!

Beating some 13,000 other company nominations, PayCaptain has come out top thanks to our inspiring mission, positive impact and flexible working environment - ranking alongside social enterprise giants like Oddbox, OLIO, Too Good To Go, Moving Worlds and more.

Simon Bocca, CEO PayCaptain commented "We are delighted to have been included in this list alongside so many inspiring organisations. PayCaptain is on a mission to be the most helpful payroll solution on the planet and be a force for good”

The Escape 100 campaign was started by Escape the City. While on their mission to help 1,000,000 quit their corporate jobs and find work that matters to them and the world, they began to wonder: what actually makes an organisation different, forward-thinking, and impactful? They came up with a scoring system of 6 criteria (Impact, People, Mission, Planet, Innovation and B-Corp) to rank companies, including anonymous employee reviews - and ‘The Escape 100’ was born.

This campaign comes at a key moment in working history. Since the pandemic started, employees all over the world have been given time to think about what really matters to them, and are increasingly prioritising finding new meaningful, flexible and forward-thinking work environments (as reported by The Times). In Escape the City’s recent survey of 1500 job-seekers, 89% want a career with a clear sense of purpose (up from 71% in 2015), with 73% saying that their reflection time during the pandemic has made them reevaluate their path. Furthermore, for 74% of professionals a flexible working location is the primary barometer they use when choosing a new role.

Dom Jackman, Founder of Escape the City, explained further: “The job market is still dealing with the impact of the pandemic, and jobseekers will have to work harder than ever to find opportunities that align with their values. This list has been designed to rank organisations on the metrics that really matter. What are they doing to save our planet? How do they look after their people? What problems are they solving? These are all things that jobseekers want to know in 2022, and we hope this list helps talented people discover interesting opportunities and organisations that they might not have found otherwise.”

PayCaptain’s CEO, Simon Bocca, commented on what the campaign means to the company: “We are delighted to have been included in this list alongside so many inspiring organisations. PayCaptain is on a mission to be the most helpful payroll solution on the planet and be a force for good by seeking a balance among profit, people and planet”.

Check out The Escape 100, 2022: Top purpose-led companies to ‘escape’ to in 2022 here to see our organisation’s ranking and read our employee reviews!

We'd love to talk about how PayCaptain can add value to your company and your employees - Click the button below to arrange a demo and see PayCaptain in action!